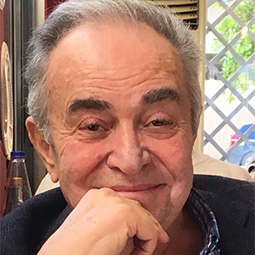 Professor Dr Georgios Piperopoulos, is Honorary Professor in Management and Marketing, Durham University Business School, UK. He has studied Sociology and psychology in American, German and Austrian Universities receiving the BA, MA and Ph.D, degrees and taught at various US Colleges and Universities (Boston College in Massachusetts, Bryant University and Providence College in Rhode Island, the University of Maryland European Division in Germany).

He taught psychology from September 1985 to June 1987 as an adjunct professor at the Physical Education Department of the Aristotelian University of Thessaloniki.

In 1987 he joined the faculty at the Department of Business Administration of the University of Macedonia in Thessaloniki where he taught until his retirement from his professorial Chair at the undergraduate and graduate levels (general and executive MBA and MIS) and served as Department Chairman for several times.

He was invited and served as adjunct professor teaching sociology and psychology at the newly created department of Language, Literature and Civilization of the Black Sea Countries at Democritus University, Komotini, Greece from September 2000 to June 2001.

He held, among others, the post of executive Director for Spectrum House programs for Drug dependent persons in and as Research and Evaluation Director for the Marathon House programs, Research and Evaluation Director for Progress for Providence, the War on Poverty Programs in . He spent several years with Good Year, Hellas, initially as director of industrial and public relations and, subsequently, as superintendent of production at the Rubber and Tire company’ s Thessaloniki factory.

He served as consultant to many national and multinational corporations in and abroad and lectured for two decades on Leadership & Communication at ADISPO, The Supreme Joint War College of the Hellenic Armed Forces, SDIEP, the Army Command and General Staff College, the Hellenic Police Continuing Education Center and the United Nations Peace Serving Operations Training Center in .

Professor Piperopoulos' teaching and research interests include the sociology of management, organizational and applied psychology for business, leadership communication and public relations and social problems. He has taught many extension division courses for the professional and lay public at the continuing education program of the University of Macedonia on the topics of leadership, public and human relations in organizations and industries, creativity, IQ and emotional intelligence and he has published extensively (four of his books have appeared on the “best seller” list in Greece: a psychologist at your side, a psychologist at the soccer field, ta piperata, Good Night Greece.)

He has given close to 2000 lectures in Greece, Europe and the USA and has been a frequent guest in television shows and radio programs and panels in Greece, commentator and author in leading Greek newspapers and magazines and for several years presented his own live Saturday evening TV-Show in Greek National TV (ET-3) and in Regional channels “I communicate therefore I am”.